Two months ago Ellie, fabulous stepdaughter and producer of the most delicious vegan cheese, took us on a walking tour around Spitalfields, and I thought I’d share it with you today given so many of us won’t be able to get out for a while.

There’s been a market here since the 13th century, but it was only in the 17th century that the streets we were exploring began to take shape. The work was led by George Bradbury and Edward Noell, and city merchants, Nicholas Barbon and John Parsons.

First it was the Huguenots who settled here in the new houses, you may recall me mentioning their chapel two weeks ago. They were followed by the Irish weavers, then East European Jews as well as Jews from the Netherlands. 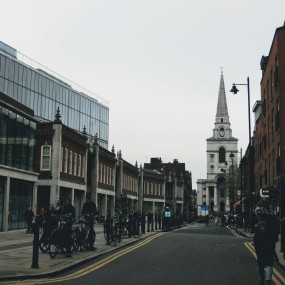 For most of the late 19th and early 20th century Spitalfields was home to one of the largest Jewish communities in Europe. It may not look it now but this was once an area of great poverty. The Jewish community had mostly moved on by the late 20th century, and were initially replaced by artists before a new immigrant community, the Bangladeshi, arrived. For the full history of this diverse area visit here.

Ellie proved to be a top notch guide and so I was really tempted to keep this back for next month’s Squares. (Yup I am encouraging us all to think literally and laterally for next’s months challenge). However she was so fabulous guide I decided to share this post early. It is though most unfortunate I am not doing a very good job of remembering the fascinating insights she shared. I do though recall her mentioning the history behind the names of Spitalfields, Artillery Passage, Gun Street and Artillery Lane. During the reign of King Henry VIII the priory and medieval hospital (St Mary’s Spital) was closed down as part of the dissolution, and the area was then used for weaponry practice. When it was sold for development in the 17th century the developers retained the names to reflect the past. Things don’t change do they!

A few steps away on Artillery Lane we came across what is believed to be London’s oldest Georgian shopfront. Built in the late 17th century and renovated in the mid 18th century by Huguenot silk weavers, it has hardly changed. If you visit here you can see what it looked like in 1912 when the Levy family (fruit packers and dressmakers). Two members of the family are still alive to this day. For more photos of these streets a hundred years ago check out this newspaper article. 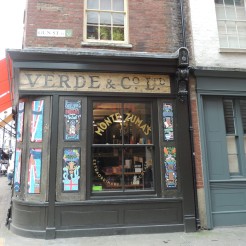 You all seem to like the history of Cyprus Street I shared the other day, so thought I’d take a moment today to share a little bit more about some of the residents on Elder Street. The most famous is Mark Gertler, a 20th century painter of portraits and still-life. Born on Gun Street in 1891, he spent most of his life living in Spitalfields. In 1901 he was on Bacon Street and in 1911 still living with his parents but this time in Spital Square. They, and some of his siblings were furriers. He though was always an artist, and on the 1911 census described as an art student. It must have been after his marriage that he lived at no32 Elder Street as in 1911 there were three other families living here. The Markovitch (later anglicised to Martin), the Schiffman and Shaiak families, most of whom were in the clothing trade. As were the families either side of them – Hyams, Shames and Tanner at no 30 and Simons, Levy and Godjaard at no 34.

Opposite at no19, Elder Street and where I captured the ghost sign lived the Cohen family, furriers like Gertler’s parents. And at no21 with a Sun Fire Office insurance sign lived the Powells, who were in the catering trade and the Blackfords who worked as wharf labourers. I suspect very few of those living on Elder Street these day have manual occupations, as the last house to sell on Elder Street went for over £2million! 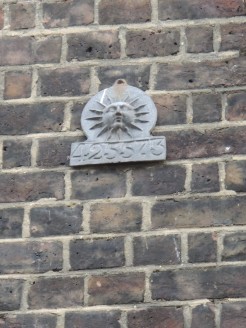 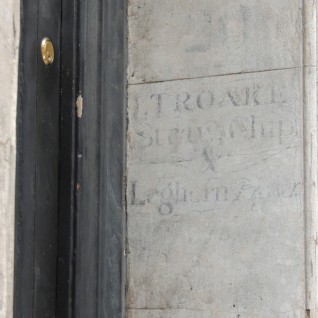 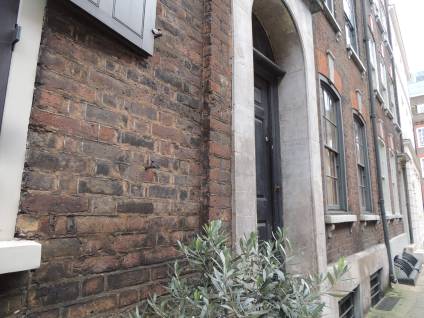 It was an incredibly cold and grey day when Ellie guided us around, so we had the streets mostly to ourselves. Inside the market though it was a different matter, packed full of locals and tourists exploring and sampling. Unfortunately I didn’t get any photographs inside, great excuse though to return after the current crisis.

Another good reason to return is Dennis Sever’s House at no18 Folgate Street, an immersive still life exploring the lives of a family of Huguenot silk-weavers in the 18th and 19th centuries. I wonder what they, and the Hart family who were here in 1911, would make of the skyscraper which dominates the Bishopgate end!

Hopefully in the late summer or autumn restrictions will ease and we will all be able to get out again in the meanwhile do visit Jo and her Monday Walks gang for their wonderful collection of virtual walks. And Margaret and Anabel if after the current crisis either you find yourselves in Spitalfields do pop into Farm Shop on Toynbee Street. Not only will you find Ellie’s cheese on sale, you could treat yourself by booking onto one of her very popular cheese making courses!

And a plea to everyone. Know of a local artisan or small business? If you do, try and support them over the coming weeks and months. Independents and freelancers are really struggling. Ring or email them to ask if you can buy a gift certificate for use at a later date or if they are still running their business from behind closed doors order their goods (like here with Ellie’s cheese). Every penny will help keep them in business, and every contact is a show of support.