To be honest I didn’t know what ‘quilled’ meant until I visited the incredible star exhibition in All Saints, Castle Cary. And even then I may have forgotten if it had not been for the fact that they all ended up in our living room afterwards. But before I enlighten you about Gabriel and the quilled stars let me first share a few shots from the art exhibition, it really was quite extraordinary and beautiful.

Every year the local community come together to create works of art for a Christmas exhibition at the church, and this year the theme was stars. There were more than sixty creations, and some of them, such as the ones created by the GP surgery and care home, had us in giggles. Click on the gallery below and you will soon see why! 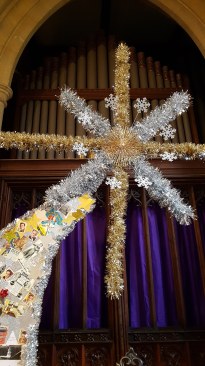 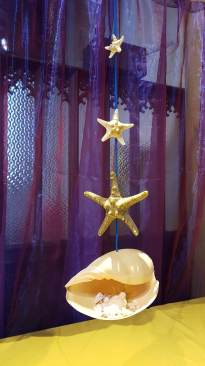 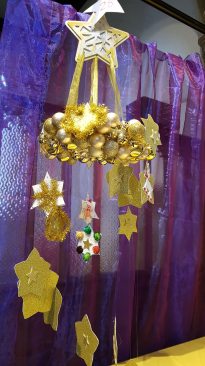 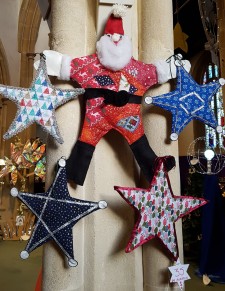 A day or so before the exhibition opened the organising committee had the brilliant idea of a silent auction in aid of the roof appeal. More than half of the artists (individuals and groups) agreed to put their stars up for auction. We learnt all of this on arrival, but I had no intention of placing any bids as I assumed the auction itself would take place long after I had returned to Winchester. 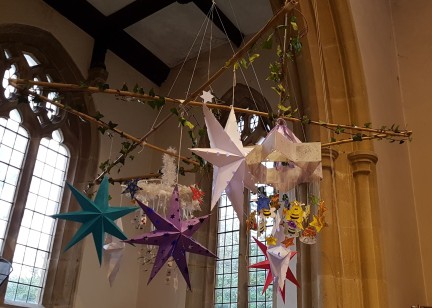 Then half way round I noticed the auction was taking place before I would be leaving. How could I resist! My first bids were on two pieces I thought my step daughters would love, and Mum very kindly offered to contribute to my bids.

Then I saw the ‘pièce de résistance’. Actually it wasn’t the only masterpiece but this one – fifty three quilled stars on a very large poplar branch – I thought I could get home whereas the other magnum opus were either too large or not in the auction. I envisaged the winning bid would be at least £50 given the skill, time and creativity that had gone into each piece and could easily go up to £100 or more.

So what would I bid, given I already had bids placed on other pieces and so could end up with a very large bill. In the end I decided to put in a silly bid, after all I probably wouldn’t be successful but it would be daft not to even try. Specially as I had bought Gabriel from the church roof fundraising stall. Made out of raw wool I thought Gabriel rather unusual. 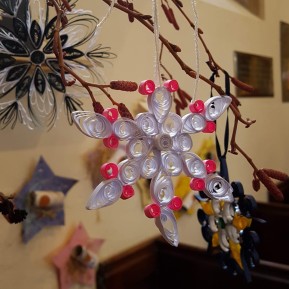 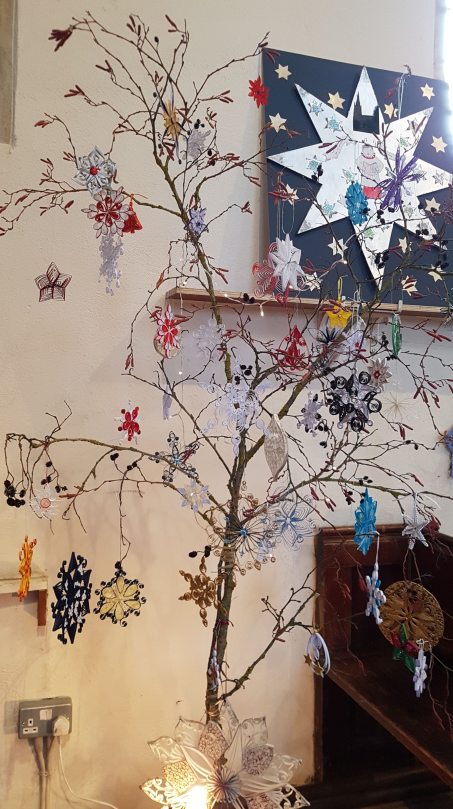 The following day I got the call I had been successful in three out of four bids. The stars were coming home with us as were the Treble Clef and the Star of Wonder. I was delighted. And if you are curious about my failed bid, well that was my lowest bid of all. It was for a very clever nativity scene made out of specimen bottles by Boots the Chemist. Unfortunately I forgot to photograph it, so here are a few shots of the fifty three quilled stars in my living room instead. No need for a Christmas Tree this year! 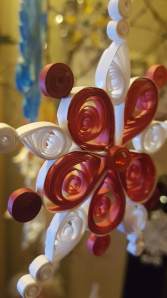 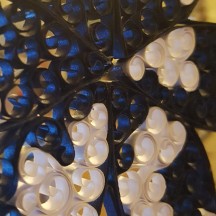 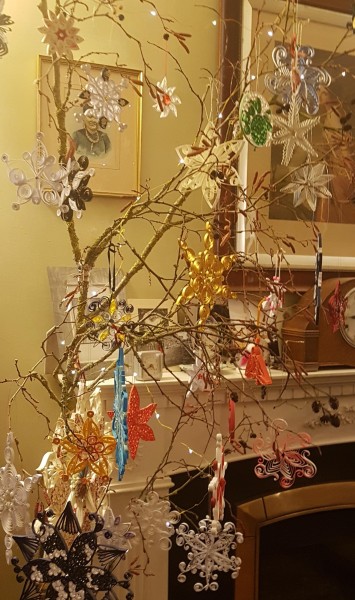 Just realised I have shown you numerous photographs of these beautiful quilled stars but not explained what they are. Quilling is the rolling, looping, curling, and twisting of narrow strips of paper to create decorative shapes and designs. There is also a little bit of gluing involved! The art form, also known as paper filigree, dates back to the renaissance, but became really popular in the 18th century. You can discover more on this fascinating art here, whilst I disappear to enjoy a fabulous and quilling Christmas!

I'd love to hear what you think Cancel reply