I have had a few problems in tracking down a ‘past’ shot for this month’s past meets present but finally I found one on a Tweedland, and here it is.

I guess it isn’t surprising I have struggled to find one since the Royal Kitchens at Kew were abandoned for nearly 200 hundred years following the death of Queen Charlotte in 1818. They reopened in 2012 following a major conservation project, and amazingly it looks just the same. Well apart from the fact the harassed chef is not here to berate the servant for failing to take the roast partridges to the King’s table.

The kitchens were designed by William Kent, one of the leading Georgian architects, and the table in the main kitchen is the one he would have seen as it is the original kitchen table. These state of the art kitchens were purpose built in a separate building to the main palace, to reduce the risk of fire and to keep ensure that the kitchen smells and smoke were not intrusive. Not so great for keeping food warm though! Initially the Royal family only used Kew Palace for weekends or during the summer, and so the kitchens were rarely used. However as King George suffered increasing bouts of illness, their stays here became more frequent and prolonged. 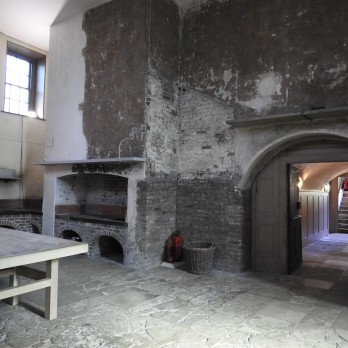 Above the kitchens were the offices and lodging for the kitchen staff, including the Clerk of the Kitchen who had day to day responsibility for managing the kitchens and for feeding the Royal household.