Since the 1800’s Harley Street has been home to members of the medical profession, and even today most Brits if you say Harley Street will think private medicine.

There are thousands of health care professionals working in and around Harley Street today. However not at No37 which is now part residential and part office space for financial advisers and legal professionals. Once though no37 was home to Mr Henry Hancock, one of the original fellows of the Royal College of Surgeons and consulting surgeon at Charing Cross Hospital. He was active from the 1830s until the 1870s and as well as general surgery is noted for his ophthalmic work, some orthopaedic work and lecturing! His biographical entry states

He was an excellent surgeon and clinical teacher. He was kindly and considerate, of a lovable character, earnest and enthusiastic about his work, and markedly straightforward and attached to duty

On the 1861 census Henry is recorded as living here with his wife, son, daughter, sister-in-law and three servants, and he was still here in 1871. However neither he not the next occupant (Frances Lawes, a widow) would ever have seen this door nor in fact the building! The current building wasn’t built until 1897-99 and at the time of its construction was considered to be ‘nothing short of a revolution in Harley Street architecture’. It is rather splendid with its panels and friezes all carved in Bath stone by Frederick E. E. Schenck. I wonder whether Henry would have approved? 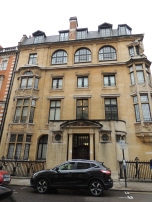 I like to think he would have done as the new building was designed with the medical profession in mind. There was though no specific client, it was a speculative build by the architect Arthur Beresford Pite. Harley Street at this time was booming as it was considered the ideal location for the home and the workplace for surgeons. This might explain why Bereford Pite retained the address of no37 Harley Street even though the front door to his new building was now at the side on Queen Anne Street!

Despite being designed with the medical profession in mind the first occupant was Edward Cooper in 1901. Edward was an underwriter at Lloyds and lived here with his wife. He later became Lord Mayor and was apparently a talented amateur singer. He didn’t stay here long though as by 1905 no37 was home to surgeons and remained so for at least the next 20 odd years. I of course knew nothing of this as I walked along Queen Anne Street, it was the door that caught my eye not its history. Has been fun though exploring the census returns and various history websites as part of Norm’s Thursday Doors.