this will not be one most people will be thinking of! When I saw Cee’s Fun Foto Challenge though it was this Tower Bridge I immediately thought of rather than the more famous one in London. 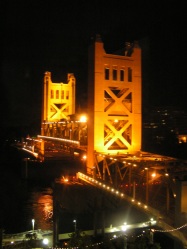 Tower Bridge in Sacramento was built in the 1930s, over 40 years later than the London one. I hadn’t really been aware of the Tower Bridge on previous visits to Sacramento, but eight years ago we had not long arrived in our hotel room late at night and an incredibly loud horn sounded outside. MrB was falling asleep by this time, but I rushed to a window and to my delight I discovered a lifting bridge.

I was to be drawn back to it again and again throughout our short stay, capturing photographs as boats sailed through and the central lift span raised. When it was built it was painted silver and a railroad crossed it. These days though whilst a railroad passes one end there are no rail tracks across it and it is no longer silver. The colour is apparently gold, however many in Sacramento complained after it was painted that it was not the colour they had voted for. Have to say I agree it isn’t really gold as most days and in most light it looked mucky yellow to us. However one evening the sunset was glorious in the west and Tower Bridge for a few moments looked as though it was made of gold as it glistened and shimmered in the evening light.

4 thoughts on “If you say Tower Bridge in England”

The Life of B and its content is copyright © BeckyB of Winchester.
All rights reserved.

and I recently visited

My other blog: Becky in Portugal

A spotlight on waders

A wader tale and some #JanuaryLight squares!

Have you seen this?

Some of my favourites 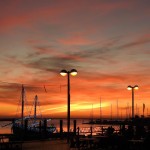 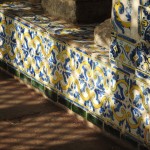 When you visit or leave a comment on this site WordPress and Akismet collect that comment, and any other information that you provide such as IP address location, your name, email address etc. For more information on what they collect and how they use this data visit here.

And for information on cookies on this WordPress blog please visit here.

Squares BeganJan 1st, 2020
and is live until 31st January. Join us, the theme is words ending in light!
%d bloggers like this: