Last week after strolling in Schenley Park we got into the car and headed north to Lake Erie.

En route we were sidetracked by a shopping expedition at Grove City, and after exchanging many dollars for shopping bags soon found our way again to Erie.

The shores of Lake Erie are Pennsylvania’s only ‘seashore’ and are beautiful. The lake is the 4th largest of America’s great lakes and if you happen to be incredibly fit you can swim the 23miles from Erie to Canada. There were no lifeguards today so we restricted our adventure to a stroll.

Our stroll took us through woods, marshes and beside the beach. We had been advised to stick to the trail although at times it was difficult to tell where the trail was.

The stroll should have been a hike but I’d only brought one pair of shoes and as the footpaths disappeared into marshes we decided it might be sensible to curtail the excursion to Gulls Point. Gulls Point in Presque Isle is apparently one of the places in Pennsylvania for birding, and whilst we didn’t see much on this occasion we did have fun.

A few months ago I advised us all ‘to be part of the silence‘ well that would have been difficult on this walk as our ears were bombarded by bird calls, tapping and rustling noises! However by keeping human noises to a minimum we did see more as our ears directed our eyes.

Most of the facilities have closed in the park now for the season, but there were still plenty of people cycling and jogging. Personally I prefer visiting state parks out of season as they are much quieter and you can fool yourself into thinking you are all alone. Well apart from the posing herons!

There are many bays around Presque Isle and when in these the lake feels calm and gentle.

As you can see from the photo above we were a bit early for the full Fall colours but I did spot a few stunning examples. 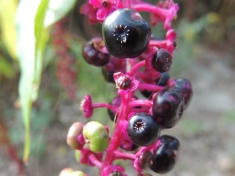 I’ll be posting more fall colour in a few days as since our Erie trip the trees have erupted. Let me leave you for now though with a final shot of the heron and an admission that we often are sidetracked by shopping here as are the Canadians. There’s no sales tax on clothing in PA!